GRID vs CrossFit. The Science. 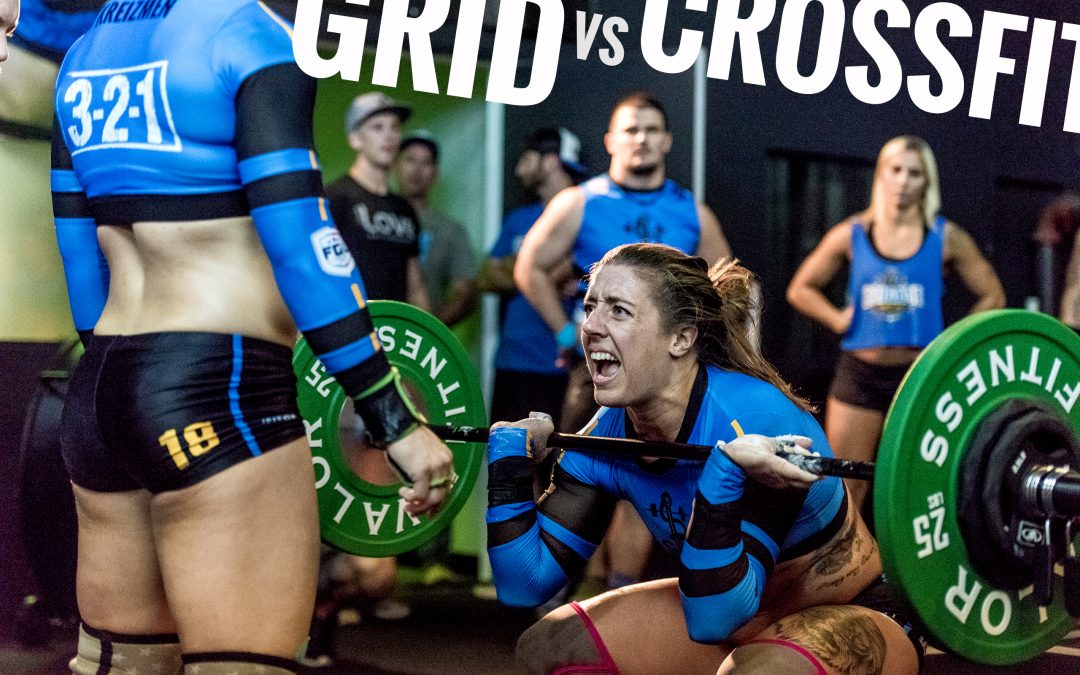 You might assume, by the headline and common assumptions these days, we are here to bash CrossFit.

We love CrossFit. Everyone that works for us does it regularly, and most participate in the Open, watch the Games, and spread the good word of CrossFit and what it stands for all the time. GRID is not an alternative to CrossFit. It’s a separate category. It is an opportunity to take the tremendously valuable aspects of what CrossFit provides, and do something different with it. It allows you to play a game with your strengths and have fun with your fitness. It creates another reason TO CrossFit.

CrossFit, by their own definition: “CrossFit is a fitness regimen … specifically designed to improve fitness and health”. They also describe it as a “lifestyle”. It’s effects are “measured” via incremental workouts (tests) where the progress in results in these workouts/tests reflects progress in fitness. Performance in these workouts has been turned into a competition and that is how we would describe the basis to find the “Fittest on Earth” (the CrossFit Games) and most any other fitness competition that CrossFitters typically sign up for. This concept is AWESOME, and we believe, will span the test of time because it fits the same type of criteria that supports the Olympics, which has existed for thousands of years (with a short hietus).

That said, let’s compare some of the goals and aspects of GRID as a competition format.

The goal of GRID is to have fun and be entertained. Right off the bat. Whether you are playing GRID, or watching it… the concept is, as with other team sports like football or baseball, to enjoy all facets of it. A very different goal than CrossFit. People developed team sports to be fun to play first…. GRID follows this concept. It’s a game. It’s a team sport that utilizes a combined effort of individual strengths requiring strategy and team camaraderie. It also does so in a way that is less physically taxing. Lets break it down.

Here is where we get into the science.

DISCLAIMER: The following claims are not actually based off of any polls or studies. In fact they are just made up based on our observations and other generalities. This actually means it’s not science at all. (oops) We do feel, however, it would be hard to argue against the general thought process of each “claim” if you have working knowledge of whats being stated. If you would like to argue, please feel free!

So we feel, generally speaking, to enjoy doing something you are usually pretty good at it. Think of your favorite activities and why you like them. Therefore, if the goal is having fun, we should get rid of this whole dealing with weaknesses part.

To really be considered “fit”, or perform well at a typical fitness competition,  you must be well rounded and at least decent at ALL facets of the fitness. This is great inspiration to “attack your weaknesses”, something we can all benefit from. It’s also great inspiration to be more overall physically fit and maximize the effects of your training in other aspects of life. Here is the problem… its not fun to publicly attack your weaknesses or to not perform well because of them. The results of working on weaknesses are fun, the progress is fun, the feeling of accomplishment is fun… but the act of doing it is a humbling and often painful experience. It’s the effects and the feeling afterward that generate the positive association. If you want to go out and compete and showcase what you have built, weaknesses (often out of your control) can put a big damper on the drive to compete, or the ability of someone to perform well in a typical fitness competition.

To confirm this, we took a poll of no one and asked who whether they prefer to compete with their strengths or weaknesses. The results are clear.

So lets think about some generalities regarding ability in fitness. Given there is a full range of body types, athletic backgrounds, genetic capabilities, and other smaller variables in people, the percentage of people that have the ideal characteristics to be good at all dimensions of fitness is small. Common sense. It’s hard to be a great fitness athlete, thats part of what make the great athletes so amazing. It also means that the strengths of people will vary a lot. Here are some rough categories that one could say people might fall into as their optimal type of workout.

Chances are, you fit into one or two of these categories and its not the top 10% of everything. It’s a pure numbers game. Most people will not be good at everything. Because GRID teams utilize specialists in addition to well rounded athletes, the specialties shown in blue are inherently optimal for GRID. This means a much higher percentage of people can be using their strengths, and having fun in competition. While the red strengths aren’t inherently optimal for GRID, we have seen many athletes that would claim them as their primary strength love GRID as well. This can be because they have other strengths that dip into other blue categories, or really appreciate one of the other following factors not strictly related to physical ability.

Given that a good box is built on community, and that most of us have seen the benefits of team sports growing up, it makes sense that most people would prefer to compete with friends/teammates, than alone. People who prefer to compete alone generally are really good (the top small percentage) or don’t play well with others. To re-enforce this, we polled 1,000 unicorns and here are the results:

Few things on earth can replicate the experience of playing your role on a team and winning or losing together. It’s why team sports is such an engrained part of our society as the rewards are highly valuable, and translate into many other aspects of life. Our ambassador Nicole Capurso explains this concept well in this article.

Finally, a good fitness test includes longer time domain workouts as an important dimension of fitness. As we all know, these are the ones that suck the most as well as take the most physical toll. Since one GRID player will not typically be performing for longer than 30 seconds at a time, the physical toll is often much less and we have gotten feedback as such from our GRID 6 Series events thus far. Less toll = less recovery. We again, did not take a poll, and here are the results.

The main point is two things:

The primary goal of GRID is a fun, rewarding and entertaining experience, not to test fitness

There are MANY other factors as to why GRID is great, but these are two basic ones that people often confuse and we spend a lot of time clarifying. Thus the inspiration to write this non article.

Click here to see why we feel the sport of GRID will disrupt how society currently thinks about sports.

What are your thoughts? Agree or disagree? Comment below.

If you have interest in playing GRID yourself, start here with GRID 6. Its for all fitness levels.